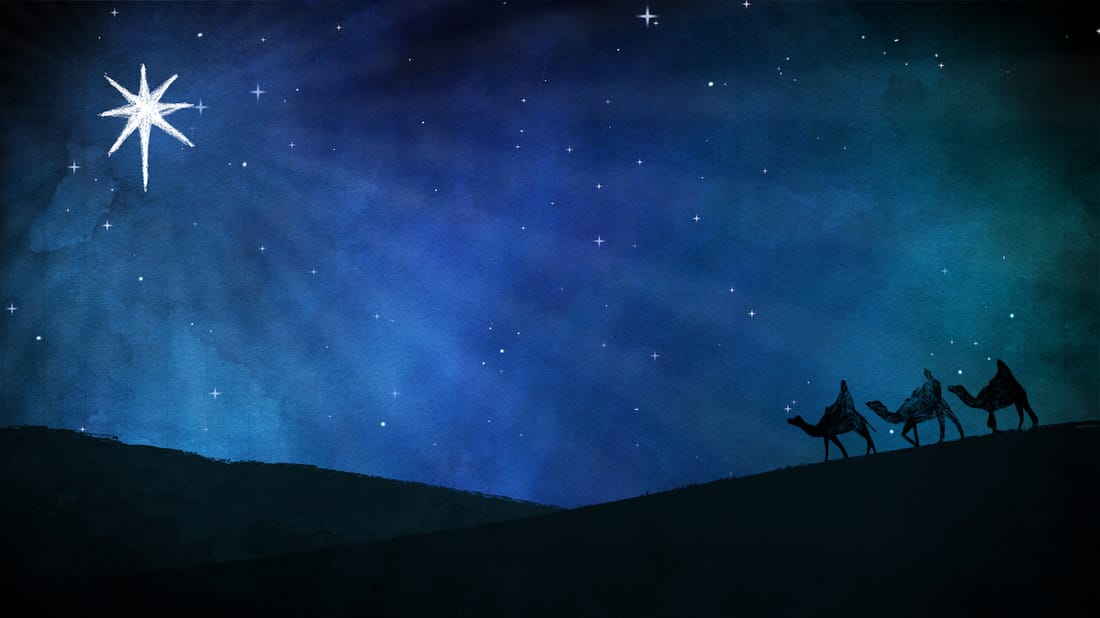 Readings
o god, who on this day rvealed your only begotten son to the nations by the guidance of a star; grant in your mercy that we, who know you already by faith, may be brought to behold the beauty of your sublime glory...
collect for Epiphany Mass during the day
“Don’t talk to strangers!” Did your parents drill that one into you as a kid – especially in those moments when your world was about to expand to that playground several blocks over or your first time on public transportation?

The advice to children who are so vulnerable and sometimes too trusting makes sense. The world that we inhabit can be a scary place and there are people who are always on the lookout to take advantage of others. In fact, it would be easy to become cynical about the human animal. We are prone to selfishness, and we have a well-demonstrated tendency to violence.

On the other hand, there is a great beauty to found in the human heart. We can be so generous, caring, insightful, and creative. We create great works of art and solve complex problems. We stick together in times of danger and we protect the vulnerable in our midst.

Today’s feast, that of the Epiphany, speaks to strangers. In the first reading taken from Isaiah, we hear the prophet address a people who have recently returned from exile. This people suffered war and conquest by foreign nations. They lived through betrayal and dishonesty on the part of their own leaders and the trauma of being taken from their home and reduced to poverty in exile. Now, back in the land of Judah, their initial joy at liberation has been undercut by reality. The land is a ruin, the countryside the abode of bandits. Everything must be rebuilt and replanted from scratch. Even as they labor to rebuild, they are menaced by petty rivals in places like Samaria and Edom.

To that miasma of despair, Isaiah spoke words of great promise. He proclaimed that the miserable half built settlement before them was the Jerusalem called to arise and shine before the Lord. He promised that those nations that had conquered and oppressed and continue to menace them would come with their wealth and power and pay tribute. Half the people must have stood open-mouthed at the audacity of Isaiah’s vision. The other half must have had choice things to say about those nations and their treatment of the people of Judah.

To say that Isaiah’s prophecy was difficult to accept is an understatement. Hundreds of years later, the inhabitants of Judea would still debate the merits of those nations and their place in God’s plan. Some, like the zealous Saul of Tarsus railed against the stranger and those Jews who would mingle with them. For this, among other reasons, he persecuted the followers of Jesus. That same man, with a new vision as Paul the Apostle, had to convince Christian believers of the truth found in Isaiah’s vision of many peoples brought to faith in the Living God. Paul announced the shocking news that Gentiles and Jews alike shared a call to the worship of the Lord. The Christians would have to learn to speak to strangers.

Likewise the passage from Matthew challenges those who would prefer to trust only their own. Herod and his dishonest advisors should have been the first to understand God’s ways and welcome the fulfillment of prophecy. But for the corrupt Herod every other person, even in his own family, was a rival to his power. In this instance his paranoia extended to the work of the Lord Himself. Herod and the chief priests, the leaders of the people, turn out to be the dangerous ones. It is the three strangers who arrive with openness and devotion. Here at the start of Matthew’s story we have hints of the tragedy to come. Jesus’ own will reject Him, but others, strangers and outsiders, will come to faith.

Not long ago, I read an article about the importance of the size and diversity of human communities for the sake of technological advance - the larger and more diverse the community, the more rapid the advance. It is not just a matter of individual genius, but people building on and off each other’s ideas.

Today we learn that there is a similar truth to be found in the spiritual life. While it may be prudent to be wary in a dangerous world, caution that divides us, impoverishes us. If we never talked to strangers, life would be dull indeed. The richness to be found in Isaiah’s vision, Paul’s proclamation, and the witness of the Magi is really the richness of grace. All human beings were estranged from God. But God spoke to strangers and in doing so transformed us into friends. Today, He asks us to see the beauty of that transformation and to open our hearts one to another, strangers and aliens no longer.
Proudly powered by Weebly