sixth sunday
in ordinary time (B) 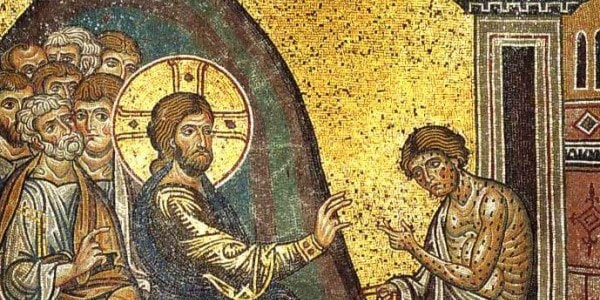 readings
Two weeks ago, we looked at the issue of holiness codes in the Old Testament. In the ancient world view, holiness was a matter of separation, of dedicating or consecrating persons and objects to God. In part, the system was meant to protect human beings from the awesome power of God – to avoid the danger inherent in approaching God in an inauthentic or unworthy fashion.

This weekend, we hear about the particular matter of persons who suffer from a skin disease. While the prophets warn Israel that God is more concerned with the heart than external religious observance, this passage is applying an external principle of sacrifices to persons. If flawed animals or crops are not worthy for offering in sacrifice, then a human being who is marked by disease would likewise be rendered “unclean” and unworthy of approaching for worship. These provisions may also have arisen from the concern to protect the community from physical illness. Nonetheless, the language here indicates that this is a question of religious unworthiness, a taboo being established against those with leprosy or other skin ailments.

In a somewhat unusual fashion, the Psalm response appears to correct this focus on external condition by speaking of “guilt” and “sin” and turning the attention back to the question of interior disposition.

The context of Paul’s message to the Corinthians in the second reading has little to do with leprosy. Paul is addressing a pastoral and social problem for the Christians of Corinth. The meat used in pagan sacrifices was later sold and might be served at a table where Christians were present. They disagreed on whether a Christian could rightly consume such meat. Paul lays down a principle for them. Whatever they do, they must act for the glory of God and avoid giving offense.

While there were other conditions that rendered an individual “unclean” for the purposes of worship, the victim of leprosy suffered an especially cruel fate – that of banishment from the community. Just when they might need assistance the most, they were denied the comfort and life-preserving help of family support. This fact made leprosy among the most feared diseases of the time. It also helps us understand the surprising and dramatic nature of the encounter we witness between Jesus and a leper in the passage from Mark.

The Gospel of Mark is often terse in recounting events from Jesus’ Galilean ministry. Although brief, this story gives us more in the way of detail than most. The leper’s actions are dramatic. He kneels, he begs, and he declares Jesus’ power to make him clean. Others have reacted to Jesus with amazement, but this man approaches Jesus with faith, and with his kneeling he expresses his understanding of Jesus’ status.

Jesus’ response is even more dramatic. He stretches out His hand, touches him, and speaks words of healing power. Jesus has shockingly violated the prescriptions of ritual cleanliness by touching an untouchable. Even before the wonder of his words, this extraordinary action carries a healing of its own. And in healing this man of his leprosy, Jesus also implicitly absolves his sin and restores him to the community. His isolation is at an end. The man expressed faith in Jesus’ power to heal, but Jesus’ actions and words are more than power, they are compassion. The powerful one, the Messiah and Son of God, is also deeply compassionate.

This passage points to the remarkable nature of what is happening in Jesus’ ministry. While many will misunderstand him as a wonder worker or another prophet, He is so much more. In Leviticus, Moses and Aaron could do no more for a leper than drive him from the community. Jesus does more than work a miraculous healing, He demonstrates His authority to put aside the ritual prescriptions. The worshipful behavior of the leper is justified, this is the unveiling of God’s presence and action in the world.

But there remains a tragic aspect to this passage. All Markan passages contain the shadow of the cross and that is especially true here. Notice that after touching and healing the leper, who is now to be restored to the community, it is Jesus Who must “remain in the deserted places.” And think forward to the passion and the way in which Jesus’ skin will be marred by a torturous scourging. If you look past the details, you will see that this encounter tells the story of the Gospel. We are all the leper, disfigured by sin. Jesus touches us, and in so doing, He takes on the price of our sin and our redemption. He makes us clean and restores us to communion. This passage should make us weep with wonder and gratitude.