fourth sunday
in ordinary time (B) 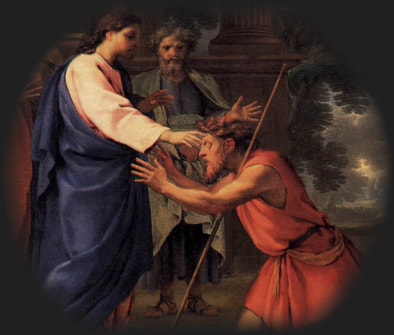 In the Old Testament, there is a deep awareness of the awesomeness of God. There is a sense that the power of God is so great that it poses a danger to mere mortals. To approach God unworthily risks calling judgment upon oneself. There is a reason that angels often say “do not fear” to the prophets. Anyone who hears or sees God would be right to fear such power and truth.

Think then upon the dilemma of the people of Israel during their journey in the desert. While Moses might have faced the terrifying presence of God on the mountain as they waited below, Moses brought that presence into the midst of the people. The pillar of fire by night and pillar of cloud by day – the presence that brought them forth from slavery would now travel among them in the Ark of the Covenant. First in the tent and later in the temple, the people would have the risk of that power at close quarters. And so around that presence grew a whole system of holiness codes. They were not a matter of morality but rather boundaries and protections for the people. Priests, times, and objects would be set aside and consecrated to God in order to safely maintain the weight of God’s presence in the camp and later in the city.

At close quarters with the presence of God, there is nothing more dangerous than inauthenticity. People are skilled at deception, but such skills cannot serve in the presence of Truth. In the passage from Deuteronomy, the people hear good news – the promise that God will speak to His people. But notice their fear that a direct experience will endanger them. They are assured of a safer route – that of an intermediary like Moses. The prophet takes on the risk in the event of falsity. He must speak the truth or be destroyed. Nonetheless, the people have the responsibility to hear and obey that word of God spoken by the authentic prophet. In this instance, the text appears to envision a particular figure – a prophet like the great Moses – one who is promised for some day in the future when God’s truth will be revealed in a new way.

The New Testament proclaims that Jesus is that long awaited revealer of the Truth. In the passage from Mark, the people who hear Him recognize the power of His authenticity. He is one like Moses in that He reveals God’s presence and action. He is one greater than Moses in that this presence is no longer mediated, but the direct experience of truth and grace. Jesus speaks truth to evil and it recoils, stripped of its power to deceive. In the ministry of Jesus, something has changed. Holiness here will not come from the observance of boundaries, but will be found in the surrender of the self to God’s will. It will be the consecration of the heart rather than objects or sacrifices. In the person of Jesus, the law comes alive and God’s presence is not contained by ark or temple walls.

In Paul’s letter to the Corinthians, there is such a consecration of the heart. Paul lived his life and ministry with the deepest awareness of Christ’s presence and expected that presence to be consummated soon. Paul allowed that presence to permeate every corner of his heart and every aspect of his life. He was an open book, offering to the Lord even his failures and tribulations. In this passage, he demands a similar degree of dedication from the Christians in Corinth. Even the most important relationships and realities in their lives must not distract them or block them from hearing and responding to the voice of the Lord.

Our conception of holiness involves a life of faith and moral integrity. We look to the saints, literally “holy ones,” to find example of faithful lives. But holiness is not only a matter of prayer and adherence to a moral code. In the biblical conception, holiness is consecration. It is a setting apart of a person, time, or object for God’s sovereignty alone. The truth of God need only be feared by those who would deceive and lie to themselves and others. While we must live in the world, we must never live by its priorities and values. For the Christian, the only liberating truth comes from God and we would do well to dedicate, even consecrate ourselves to that truth. Oh that today we would hear His voice!
Proudly powered by Weebly