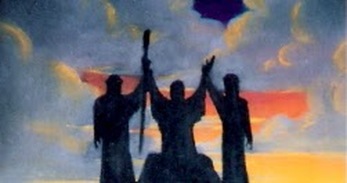 God has a funny way of answering our prayers, because it is often in ways that we least expect. As much as we feel like we can tell Him – this is what we need, and this is the best way for it to happen – He usually shows us that He has something else in mind. With faith, life then can become a bit of an adventure with plenty of twists and turns. We’re often reminded of the old expression: man plans, God laughs.

The people of Israel must have been quite surprised in how God answered their prayers for deliverance from exile. He uses Cyrus, the Persian King, to send them back to their homeland so they can rebuild their temple. It must have been hard to grasp that God, rather than elevate one of His chosen people to lead them from exile, selected a gentile. Isaiah writes of Cyrus as the anointed of the Lord, whose success in conquest is all thanks to divine intercession. Just as God had used Balaam and his ass, the recalcitrant Pharaoh, or even the Babylonians who conquer Israel, He makes His will known through unexpected means. In each situation God shows both His great power, ruling over all peoples, but also His providence in caring for His chosen.

The psalm thus intones a paean of praise. In every situation, every upheaval, every blessing we do not expect, God alone is due the glory and thanksgiving. Throughout history it has been God’s hand that has guided humanity toward the good. While so many nations have worshipped other gods, while so many in our world today have found gods in money, power, and pleasure, none compare to the greatness of our God who created the universe and all that is in it. None can compare to our God who grants us all that is good.

We see St. Paul expressing that gratitude for God as he writes to the people of faith in Thessalonica. Leaving behind Silvanus and Timothy, Paul had been rushed out of the city, but now they have returned to him with good news. He gives the glory to God, and recognizes that it was not by his word alone, but by power and the work of the Holy Spirit that the Thessalonians have grown in faith. Throughout Paul’s writing we see that constant recognition that it is only God’s power through Him, it’s only by surrendering to God’s will in all things, that he is able to spread the Gospel.

In Matthew, Christ himself challenges the presumptions of those who would try to ensnare him. They flatter him, but Christ sees they are asking a question with no safe answer. Either he offends the crown in refusing to pay Caesar, or he offends the Jews in being willing to pay. He transcends their question though, showing that God is beyond the limits of human borders. While Caesar may be their earthly ruler, that in no way conflicts with God being the supreme ruler, because it is ultimately from God that Caesar has any power at all. As He did with Cyrus, God can work through earthly authority. And by extension, we ultimately limit God’s power in us if we think it is impossible for us to carry out His will even in a hostile environment.

This Gospel therefore offers us a powerful challenge in our world today. So often we do find ourselves surrounded by non-Christian forces, and we can become discouraged. Yet Christ reminds us that as much as we recognize those earthly powers over us, we look ultimately to a higher power. God can bring good even out of the darkest places and He can work through us to do much of it. We can think of the strength of the faith in persecuted countries like Poland, and the gift of saints like Pope St. John Paul II. Even if we are deprived materially, we are deprived only of things that belong to this earth. We can still become rich in those things that belong to God. We therefore strive to work within the conditions we are given and pray that we may transform them. No government, no country, no city is perfect, but the calling of the Christian is to consecrate his or her soul and all that he or she has to advancing the kingdom of God. We accept that challenge willingly and embark on the adventure of life, through every twist and every blessing, trusting that “all things work for good for those who love God” (Rom 8:28).