Readings
God of might, giver of every good gift, put into our hearts the love of Your name, so that, by deepening our sense of reverence, You may nurture in us what is good and, by Your watchful care, keep safe what You have nurtured...
​Collect for the 22nd Sunday 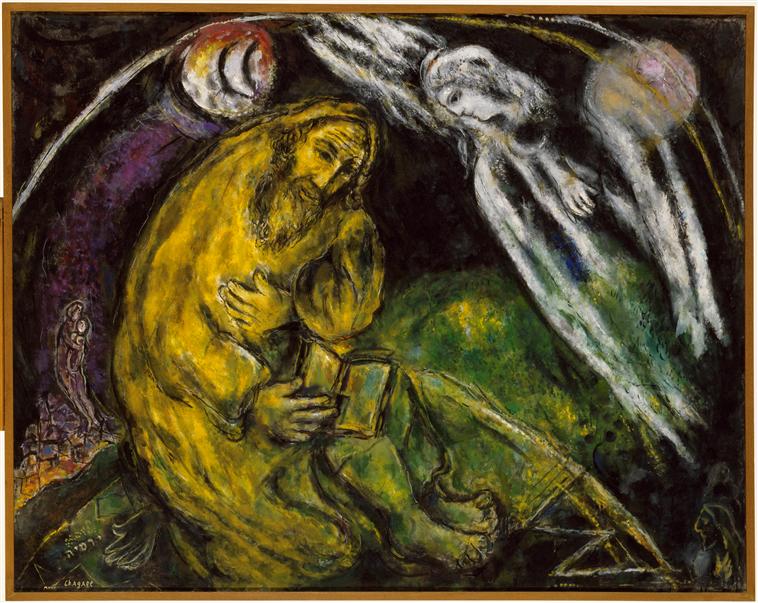 The Prophet Jeremiah by Marc Chagall
When Christians think of Old Testament prophecy in the New Testament, Isaiah often comes first to mind. The New Testament cites the prophecies of Isaiah in a number of places, usually with regard to the coming of the Messiah. Nevertheless, many scripture scholars believe that in His ministry Jesus identified most with the prophet Jeremiah. Jeremiah’s fiery preaching was not well received in Israel. For his efforts he experienced rejection, persecution and death.

In this poignant passage from the prophet, Jeremiah laments the situation in which he finds himself. His address to God is shocking in its reproach as he accuses God of misleading him. Despite his anger and his desire to give up, Jeremiah continues to be overwhelmed by the power of God’s word. He must speak even though the price for doing so is high. These verses form part of a larger whole with three parts. This lament forms the first part. In the second part, Jeremiah prophesies his own suffering at the hands of his enemies. In the last part, the prophet reaffirms his confidence in God’s power and will to deliver him.

Jeremiah’s honesty in these verses is remarkable. He admits his despair and the crisis he faces in his heart. He speaks boldly to the Lord with bitter reproaches. But he also remains true to his calling and accepts the sovereignty of God. This may be a moment of crisis, but it is a crisis of faith and faith will have the last word.

The Psalm today echoes Jeremiah’s overwhelming passion for the Lord. The same longing Jeremiah describes as a “fire burning” in his heart is now sung of as a thirst for the Lord. The Psalm also proclaims the same confidence in the Lord to deliver his faithful servants.

Like Jeremiah, Jesus came to His ministry with a profound sense of God’s intimate presence and a willingness to proclaim God’s word whatever the price. And like Jeremiah, Jesus encountered fierce and deadly resistance to that word. This passage from Matthew follows immediately upon the moment in last Sunday’s reading when Peter confessed his faith in Jesus “the Christ, the Son of the Living God.” Recall that in Matthew Jesus then calls Peter the rock of the church. In today’s passage, Matthew’s text parallels Mark once again as Jesus reveals to the disciples the close link between His identity as Messiah and His destiny to suffer and die. They misunderstand and Peter impetuously objects. Jesus must rebuke him and begin to explain to the disciples. They cannot imagine this notion that the Son of God will suffer.

Here, Jesus is preparing His disciples for the painful days of the Passion, but He is also preparing them for the life of discipleship. Jesus’ own faithful obedience to the will of God even when God requires terrible suffering and death becomes the model of Christian living. The disciple must exhibit the same self-emptying way of living if he or she is to share in the ultimate victory. The easy road may tempt, but it is never more than a dead-end. The more difficult path is the one that rises to glory.

In this regard, St. Paul gives good advice in the passage from Romans. Paul compares Christians to the animals that were once sacrificed in the Temple worship of God. But unlike the animals, they are not passive victims. Paul's Christians are conscious beings who offer themselves freely to do God’s will.

The invitation to follow Christ does not promise wealth or ease. The life of discipleship requires suffering and sacrifice, not for its own sake, but for the sake of the deliverance that belongs to God alone. There may be times when we know the despair expressed so eloquently by Jeremiah. But let there also be the same faith in God’s power and mercy. With such faith, it becomes possible to take up our cross and follow the one who embraced God’s will with a passion and bought for us the hope that suffering can find meaning when it is transformed by love.